Due to the increasing problem, the service of bed bug exterminator in Las Vegas, NV has become a need for almost every household or office.

Bed bugs get their name from usually being found within close proximity to beds. This is largely due to the fact that they need the blood of a warm blooded animal like humans to survive. They will take about 35 days to mature and they can live to about 7 to 12 months.

They will use the carbon dioxide from our breath, body heat and other biological signatures to find their host while they are fast asleep. This gives them the perfect opportunity to bite and feed before hiding for days or weeks between meals.

Bed bugs have earned themselves quite a fearsome reputation, especially since for many years they were thought only to inhabit uncleanliness and filth. As knowledge has increased and many people now travel with much greater frequency, bed bugs have taken new territory, sometimes in the cleanest of homes, hotels, or other establishments.

Due to the valid reason, a large number of households and commercial offices are on a lookout for a professional bed bug exterminator in Las Vegas, NV to get rid of the issue. 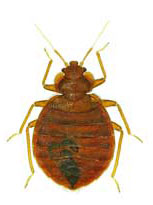 Bed bugs have been found in the most prestigious five star hotels and high-end retailers as well as in swanky apartments, city buses, office buildings, and schools. What was once a developing world epidemic overseas has gone mainstream into almost all aspects of American culture, and the problem is one that is shared by even some of the most meticulous of home or business owners.

1. Study the bites. Are they small and rashy, or are they raised and random? Bed bug bites resemble flea or mosquito bites, but unlike mosquitoes, bed bug bites are usually unnoticed at first. That’s why a person can awaken with fifteen bites in the same area and have no knowledge of where they came from.

2. Look out for bed bug patterns, bed bugs sometimes leave bites in groups of three. Also, bed bugs are attracted by smell, especially the smell of carbon dioxide leaving the body. This results in frequent bed bug bites occurring around the head and neck area.

3. Go on a bed bug hunt. Bed bugs can be seen with the naked eye – adults are about the size of an apple seed – but they don’t like to be seen. They tend to hide in dark, hidden cracks and corners, so check in the folds of your mattress, behind any loose wallpaper, or around any clutter within eight feet of the bed. Telltale evidence includes tiny red fecal matter that may be found at mattress corners or on clothes.

Bed bugs can live up to a year without eating, so make sure to carefully inspect and clean any new habitation – even if it’s been isolated for some time.

If a bed bug problem is discovered, the services of professional exterminators may be required to deal with the situation permanently. Our team of trained pest control specialists knows what it takes to eliminate bed bugs. Call Ace Pest Control today for bed bug inspection in the Las Vegas NV and Henderson NV surrounding areas.